What a brilliant year of elections we’ve had.

We were treated to an enthralling and unexpected general election in the UK where Labour chased down a 24-point Conservative lead in the polls and prevented Theresa May from forming a majority government.

In New Zealand, a centre-right government led by a popular Prime Minister who could boast of a growing economy was turfed out by an opponent who’d only been in the job 6 weeks.

In France, a party founded 12 months prior to election day won both the Presidency and a parliamentary majority.

Only Germany produced a result which resembled the expected outcome and yet Angela Merkel still hasn’t been able to form a government 12 weeks since polls closed.

With such a bumper year, choosing the winners of the politicaadvertising.co.uk campaign awards has been particularly difficult, but that should mean that the taste of victory is especially sweet for the winners.

No sponsors were invited to meddle in the results, no second-rate jurors were consulted and there was certainly no public vote. Now that’s all clear, let’s see who’s won what…

Strong and stable my arse by Jeremy Deller

There were no standout posters by any of the main political parties during this year’s UK general election, but there was one which captured the imagination of the public and that sticks in the memory.

As with all great political posters it crystallises a thought that the audience would have likely already had in a memorable and provocative way.

The execution is a triumph of minimalism; it uses as little as design as possible and yet manages to look elegant and eye-catching; it features only five simple words and yet successfully and amusingly unpicks the central argument propagated by the incumbent party.

Hoey Out by Southwark Liberal Democrats

Purse by Now (agency) for the Women’s Equality Party

The dinner party by Momentum

Online video has become the most important battleground in communicating directly with voters and Momentum have consistently been in the vanguard.

Momentum have used video to launch vicious attacks on the Conservative Party, inspire their own supporters, rebut spurious claims and to organise within the Labour Party.

According to one estimate 1 in 4 Facebook users in the UK has seen at least one Momentum video.

Their best – and the winner of this award – is The dinner party.

The audience for this video are those who are not particularly optimistic about their future and / or have a sense of injustice about society and are therefore likely to be open to joining Momentum and helping the Labour cause.

It brilliantly plays back condescending lectures that prospective Momentum activists would have received from various figures of authority – parents, teachers, managers and newspaper columnists – about ‘the problem with socialism’.

It makes the intended audience believe that what Jeremy Corbyn is promising is fair, achievable and encourages the notion that the people arguing against change are hypocrites who are guilty of perpetuating generational inequality.

Runner up: The Conservative Party attacks on Jeremy Corbyn and his leadership team, whilst controversial, generated millions of views and were ideal fodder for Tory supporters to share online.

TV ad of the year

There are two words which summarise why this spot has won: production values.

This advert has had some care and attention spent on it by a production company who know how to shoot, direct and edit a piece of film into a captivating narrative.

Political advertising all too often defaults to taking stock footage, adding an overly dramatic voice over and then vomiting motion graphics over the top.  Not this one.

There’s a good idea in the ad too.

Whether you read the truck as being a metaphor for the Republican candidate or as a literal representation of the candidate’s supporters, the story effectively encapsulates the sense of intense unease that ethnic minorities feel about the cultural wars being propagated by many of those right-of-centre in America.

The ad caused a media storm, upset a lot of moderate voters and was eventually pulled by the sponsor (because of a terrorist attack in New York featuring a truck).

The ad wasn’t designed to win over soft Republican support – so those who were offended were acceptable collateral damage – its aim was to fire up the democrat base and ethnic minorities and get them to turnout in an election that they might previously have given a miss.

And because it was sponsored by an independent organisation, not the official campaign, the blow back on the Democrat candidate is unlikely to have been significant.

Give me your backing by the Conservative Party

Remember when Theresa May called a snap election and almost everyone was predicting an 80+ majority?

Part of the reason for that was Corbyn hadn’t flipped into campaign mode and begun taking an interest in generating positive news stories and generally trying to become the next Prime Minister.

But the other reason is that Theresa May and the Conservative Party had a brilliant narrative which spoke to a big chunk of undecided voters who wanted the best possible Brexit deal for Britain and had reservations about what a Corbyn-led government would mean for the country.

To win over that group of voters Theresa May needed to convince them that calling a general election was necessary to strengthen her negotiating position with the EU and that she was the best person to get Britain a decent deal.

This party election broadcast – a speech by the Prime Minister outside Downing St, interspersed with vox pops – is not the most creative one you will ever see.  But there’s plenty of research to show that the best way of winning over floating voters is to expose them as directly as possible to the candidate talking about the issues that matter most.

This was the right message, from the right person, at the right time, for the audience that were essential to a win and, for that reason, it’s a well-deserved winner.

Runner up: Change the game by Creature of London for The Green Party.

Let’s do this by the New Zealand Labour Party

Jacinda Ardern wanted a brand that communicated the fact that Labour were a revitalised, optimistic and confident party intent on transforming their electoral fortunes and making New Zealand a fairer, better society.

The job of a political brand is to summarise all of this using three words (four at most), some colours, shapes and design motifs; to be successful the result needs to be easy to apply to a range of materials, feel authentic and be distinctive.

‘Let’s do this’ was the perfect answer to the brief.  As with all great brands (and political leaders) when it’s done right it looks so simple.  But for evidence of how easy it is to get it wrong, just search online for ‘Andy Burnham leadership logo’.

Backfire of the year

Widespread and compulsory by the Coalition for Marriage

This year the Australian government conducted a non-binding national survey on changing the law to allow gay marriage.

The ‘Coalition for Marriage’ were quickly out of the blocks campaigning for a ‘no’ vote with a TV ad which accused teachers of encouraging pupils to cross dress.

Adding a little unrelated transphobia into an argument about gay marriage was enough to win this ad ‘backfire of the year’ but their victory was put beyond doubt when it was revealed that the central anecdote of the commercial was 100% fabricated.

Campaign of the year 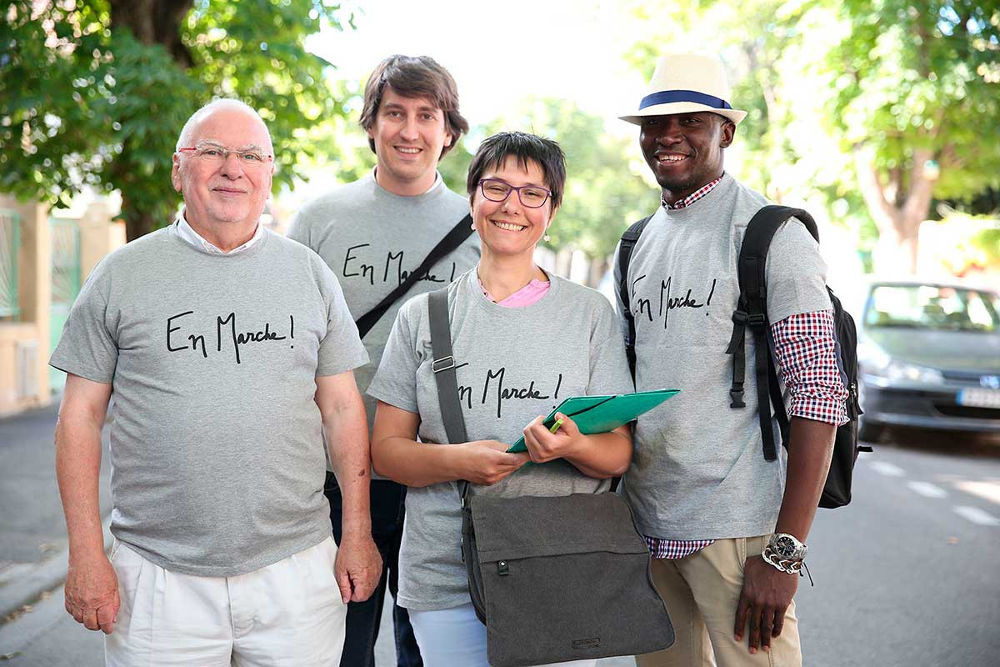 Emmanuel Macron had never held elected office before becoming President in May this year.

The party he been founded in April 2016 won a majority of seats in the French parliament in June 2017.

And in an era where more extreme political positions are in the ascendance he did it all whilst campaigning from the centre.

A brilliant brand meant that fairly normal people were willing to wear a t-shirt carrying the logo of a political party.

He used data huge quantities of 1st party  data to find out the issues which were most salient and to understand whether people felt he was credible talking about them.

He painted an optimistic vision of the future whilst empathising with the anger felt by a big chunk of the electorate.

His communications effectively positioned the candidate as above the fray and divorced from the Punch and Judy politics that was holding the country back.

And, like all good generals, he was lucky: the field opposing him was unexpectedly weak; during the campaign his rivals revealed at least one fatal flaw.

This meant his ability to sail through the ‘would like to have a pint with him’ test with most segments of the population was even more important than it would usually be.