Last week’s news agenda was completely dominated by investigative reporting conducted by Carole Cadwalladr, the Guardian, The Observer and Channel 4 News into Cambridge Analytica’s role in the 2016 Presidential election.  This weekend, the scandal has moved on to the company’s role in the Brexit referendum and illegal campaign finance practises by Vote Leave.  Here’s a round-up of what we’ve learned.

This story has rumbling on since May 2017, but reemerged on Sunday 18th March due to new evidence provided by a whistleblower from within Cambridge Analytica named Christopher Wylie.

Wylie highlighted that the company he helped create, and which acted on behalf of Donald Trump’s presidential campaign, may have breached privacy laws by obtaining data collected for a seperate purpose by a third party using a Facebook app.

It was this revelation that led to $60 billion being wiped off Facebook’s share price and Mark Zuckerberg making public statements defending his company’s actions.

Then there were video recordings which seemed to prove that Cambridge Analytica was an agency for both Trump’s official campaign and a Robert Mercer-funded PAC called ‘Make American Number 1’; such collusion between PACs and campaigns is illegal.

Hillary Clinton went further and suggested that Cambridge Analytica may have provided data services to Russian-linked groups who ran a digital campaign during the election; I’ve written previously about the sophistication of the Russian campaign here and given the nature and quality of the execution I don’t think her accusations are unfounded.

Nix is heard saying “…just to go and speak to the incumbents and to offer them a deal that’s too good to be true and make sure that that’s video recorded… you know these sort of tactics are very effective, instantly having video evidence of corruption.”

On Friday 23rd March, the Cambridge Analytica scandal went back to where it all began: Brexit.

A second whistleblower named Brittany Kaiser, former Business Development Director for Cambridge Analytica (a fairly senior role within an ad agency), revealed that her the company had completed work for Leave.EU.

Leave.EU and Alexander Nix have strenuously denied working together to election regulators, parliament and the press, but given that Brittany Kaiser was a panelist at a Leave.EU press event on the strategies they were using to win the referendum (see image below and full film of event here) their protestations always sounded hollow.  Now we know they were outright lies. 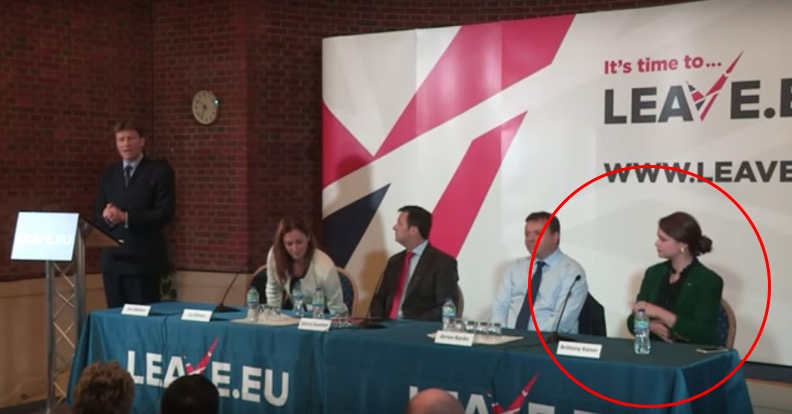 But as Leave.EU weren’t the official group campaigning for Brexit and they were generally perceived as fairly inconsequential in the grand scheme of things (their role was largely appealing to the UKIP base, rather than swing voters), the alarm-bell-ringing has been limited to those who are disproportionately interested in electoral transparency and fairness.

But today, the biggest British-centered part of the Cambridge Analytica story came to light: a third whistleblower named Shahmir Sanni.

His testimony shows that there was coordination and fund-sharing between the official Vote Leave campaign and other pro-Brexit campaigns and that this collusion was deliberately carried out to avoid breaking campaign spending limits.

This is appalling and illegal behaviour by an organisation that was led by some of the UK’s most famous and powerful politicians.

Prior to Sanni’s revelations, the accusations have been about the slightly grey area of data ownership, American elections, unsavoury dirty tricks campaigns and undisclosed unpaid work; all with elements of illegality and yet none which are so clear-cut, or so close to home, as to warrant mass public outrage in the UK.

But now we have clear evidence that Vote Leave, Leave.EU and various other Brexit campaign organisations all at some point used the same ad agency group – Cambridge Analytica / SCL / AggregateIQ.

This would be bad enough on its own, but when you consider that Cambridge Analytica / SCL / AggregateIQ are mired in controversy about data privacy breaches and some of the money being used to pay them was illegally sourced, it’s completely outrageous.

Is it possible that millions of highly personalised ad impressions – illegally paid for to an organisation who are under investigation for privacy breaches – could have flipped a significant proportion of the 600,000 votes that decided the referendum.

Finally it seems that some of Westminster’s big beasts are beginning to take notice: Labour’s Deputy Leader Tom Watson tweeted on the issue today and many more MPs are taking to the airwaves to complain.

The rules that govern our democracy have clearly been broken and the stench of foul play is thick.

I hope that the Opposition and the Electoral Commission don’t shirk the responsibility they have to make sure this is thoroughly, firmly and swiftly investigated.