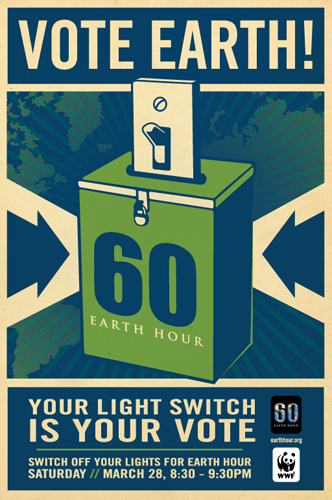 Frank Shepard Fairey (the guy who created the Obama ‘Hope’ image ) was commissioned to create a poster promoting the WWF’s 2009 Earth Hour (more info on March 28th’s big event here) and above is the fruits of his labour.

I’m not sure the title of ‘Vote Earth’ and the call to action of  ‘your light switch is your vote’ is as coherent as it could have been.  The logic police would call you up on the fact that if ‘your light switch is your vote’ then the two options would be ‘on’ or ‘off’ (I suppose if you say ‘earth’ in a french accent it sounds like ‘off’) and not ‘earth’.

I can see what John Howard means when he says that: “being paid-for advertising, [it] lacks something of the simplicity, immediacy and purity” of the Obama piece.  It was always a risk doing an ‘environmental version’ of the Obama piece; I think Earth Hour would have got the same PR if  they had commissioned  Shepard Fairey to do something completely different and it wouldn’t subsequently be judged to the same extortionately high standard as ‘hope’.